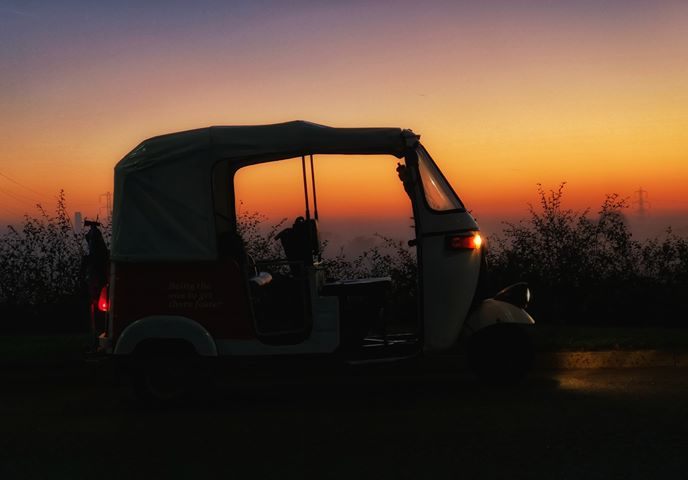 Not all Display Vehicles are monster 8×8 expedition trucks, some are a little more subdued. Case in point is the iconic Tuk Tuk. Granted, to some it may come low in the pecking order, but to others like this example, it’s top of the pile!

The thing is, it’s not just a showpiece, it’s an expedition vehicle! Owned by one James Warren of Loughborough, Leicestershire, he and his pride ‘n’ joy are off this year on a Highlands & Islands Scottish adventure with 6 cyclists in tow (hopefully not literally) as they tackle the North Coast 500.

Where have James and his Tuk Tuk ventured previously?

Well to answer that you only have to ask the man himself, for James and “Smokey and the Two-Stroke” (our nickname for his machine, not his) will be on display this April in the ‘Adventure Bike Zone’ at the Spring edition of the Adventure Overland Show. Come and say hello!

AN ANNOUNCEMENT: This story has a twist – do you own a Tuk Tuk? Fancy displaying it at the Spring show? If so contact Event Director Tom McGuigan at 4x4trading@talk21.com to arrange a complimentary pass. Only genuine Asian-made Tuk Tuks though, no Italian Piaggio substitutes.

The ‘largest gathering of Tuk Tuks in the UK’, now that would be a sight for sore eyes! What have we done?

Your destination where you can meet fellow travellers, discuss your gear requirements with the experts and improve your skills during a number of focussed workshops.

More than just  a show, it is also a gathering of like-minded folk, a festival for enthusiastic overlanders, adventurers and explorers.